Have you always fancied playing the Theremin but don't know where to get hold of one? Well now you can build a full-featured instrument for next to nothing! Thanks to the extraordinary powers of the Raspberry Pi micro-PC, very few external components are required -- the main job will be building the enclosure and the antennae.

Now even simpler! See last section for how to build it with just one very cheap external IC. 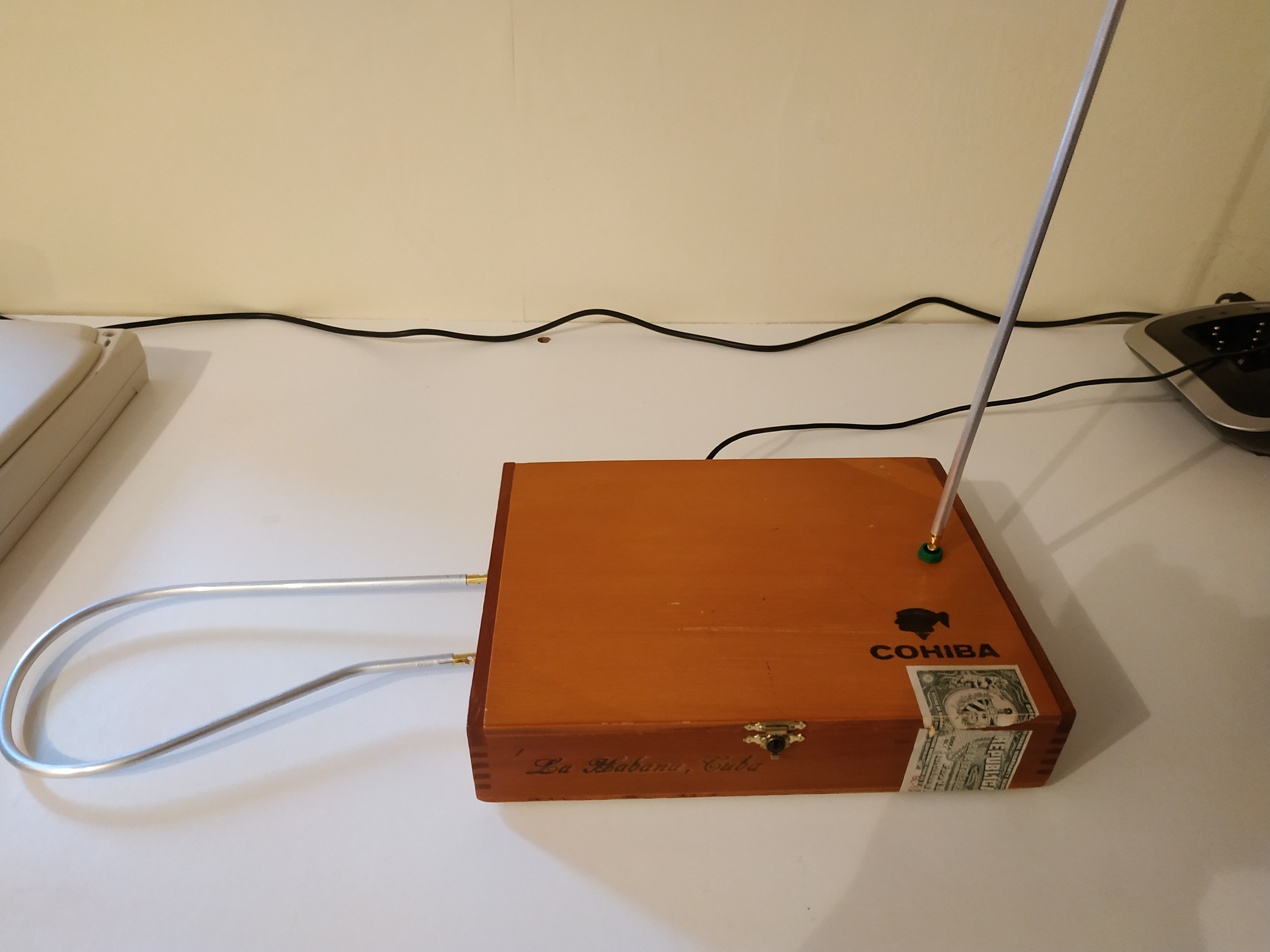 A Theremin produces sound by mixing the signals from two oscillators running at inaudibly high frequencies. One of these is fixed (reference oscillator) and the other can be varied by the capacitance between the player's hand and the pitch antenna. The mixed signals go through a nonlinear filter (heterodyne detector, sounds complicated but can be just a diode) which produces the beat frequency, equal to the difference between the two oscillators, which you actually hear. The closer the hand to the antenna, the greater the capacitance between them, the further the variable oscillator frequency is shifted, and the higher the beat frequency and hence the pitch of the tone you hear. Volume adjustment is done by a similar system in which the beat frequency controls the gain of an amplifier. Full description here.

So how does the Raspberry Pi help?

The above description sounds simple enough, but in practice it's a lot more complicated. It is difficult to set up the reference oscillators to have the exact same frequency as the variable oscillators, and then get the levels and shapes of the waveforms right. But all that is easy with computing power! Crucially the Raspberry Pi has two onboard hardware frequency generators which can act as reference oscillators, and these are programmable to the neearest Hz. We just need to build the variable oscillators, which are simple Colpitts oscillators based on CMOS invertor gates, with an extra tap in the capacitor chain for the antennae. The outputs go to extra invertor gates to buffer and square up the signals, still leaving two free on a CD4069. Instead of an analogue heterodyne detector, which needs the DC levels set up right to hit its sweet spot, we use D-type latches (74HC74) that sample the oscillator outputs at the clock frequencies, producing the beat frequencies as digital signals which are sent back to the micro-PC. On the analogue side, that's job done. Even simpler version: Do not even use an external latch to sample the oscillators -- take their outputs straight to the micro-PC and use the onboard SPI controllers to sample them at a programmed frequency. 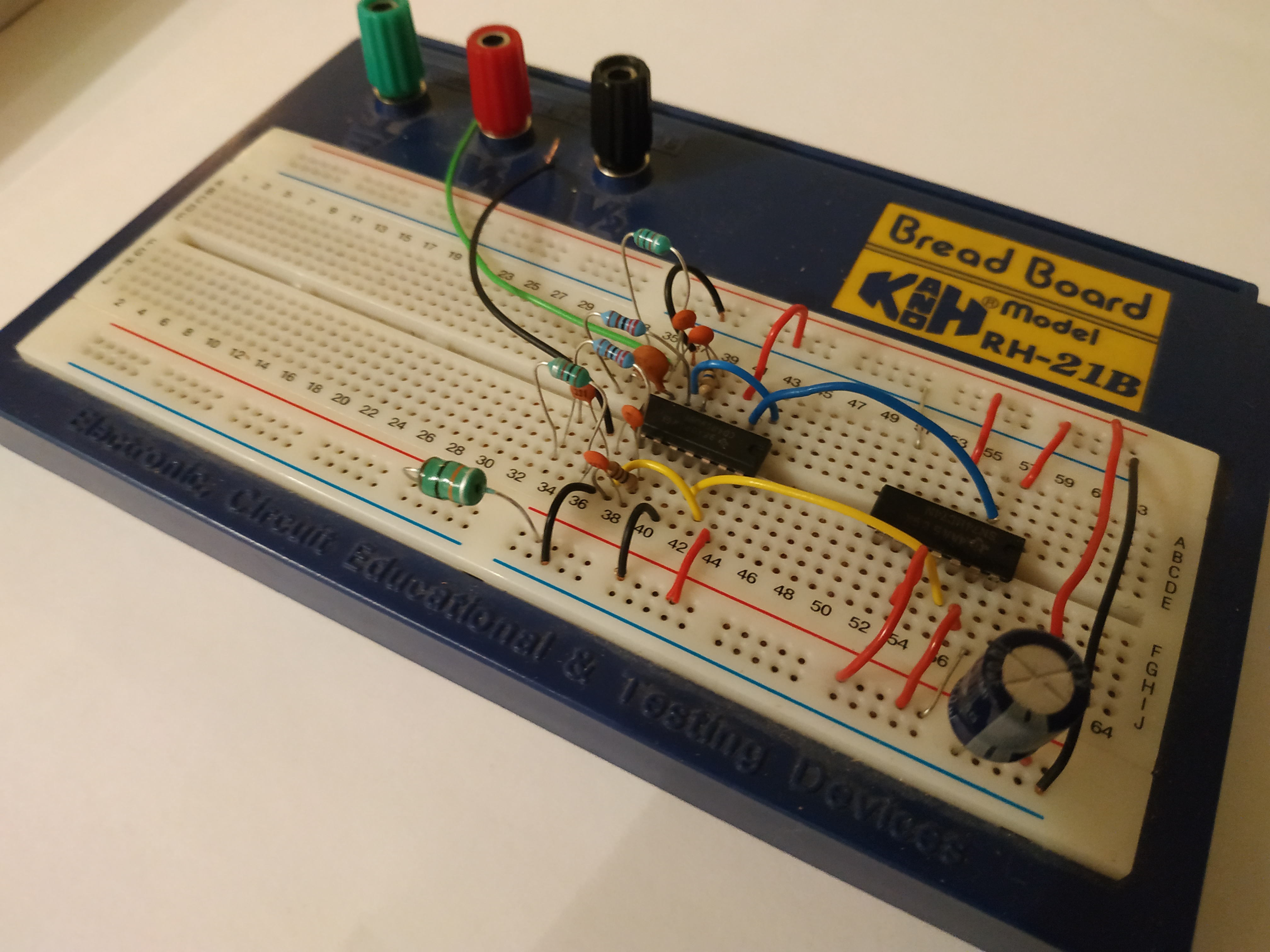 The software isn't that complicated either. My code is free, open-source and can be obtained from Github. It starts by setting the hardware clocks to various frequencies until it receives a beat frequency signal back from the detector. It then works out the oscillator frequencies, but sets the hardware clocks slightly above this so there is always a minimum beat frequency. This overcomes another problem of analogue Theremins, that the oscillators can lock together if their frequencies are too close. So the detected beat is an intermediate frequency (IF) and the difference is subtracted by the software before generating the output waveform. Having worked out the desired pitch and volume, the software generates the sound. This is done mathematically with the sin() and exp() functions, generating a series of 16-bit sample values that are sent to the onboard sound device via the operating system. So the tone you hear is a pure sine wave. 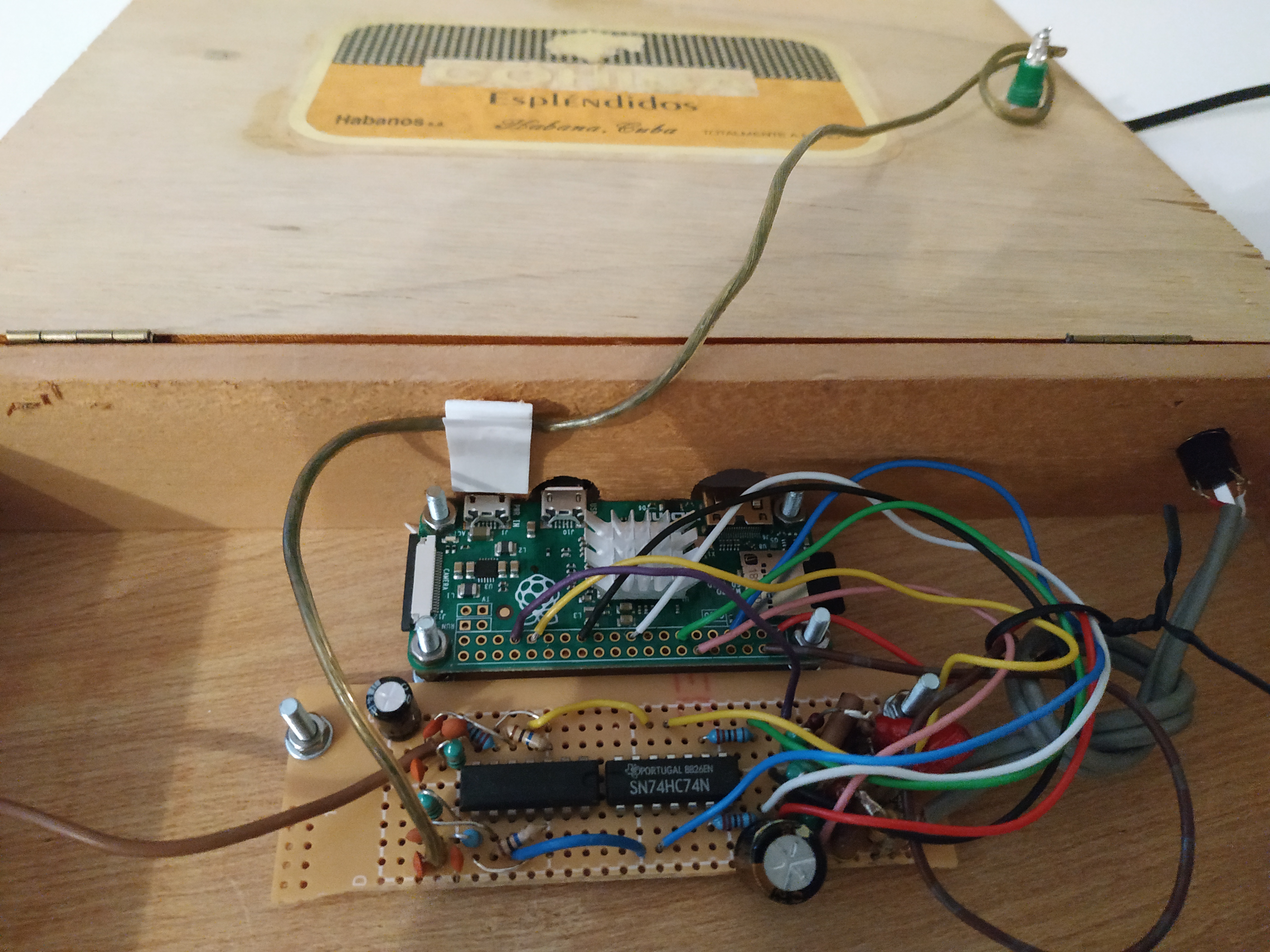 Putting it all together

Any model of Raspberry Pi will do, so long as it has a 40-pin GPIO header (smaller ones only have one clock output). The new Pi 4B has a problem with one of the hardware clocks -- some frequencies simply do not work. That should be fixed soon with software updates, but in any case the 4B is far too powerful for this project!

Your operating system is Raspbian, and you need only the 'lite' version as no desktop is necessary. This enables an SD card as small as 4GB to be used, and it does not have to be a fast one. The software also requires the libasound2-dev and pigpio packages to be installed from the repository.

As you see in the above image, my Theremin uses the Pi Zero. This tiny PC costs next to nothing, but does not have an audio jack. However the raw PWM signal for the audio can be sent to GPIO header pins, then put through a simple filter circuit to get audio output (on the right on my circuit board in the picture). This circuit allows some noise from the 3.3v supply rail to get onto the output, which can be reduced by adding a capacitor between that supply rail and ground (I used 330uF).

The system needs to be earthed somehow, to complete the circuit between the player and the antennae. This will be fine if it is plugged into an external amplifier, but if your theremin is to include its own speaker it should be earthed via its power supply. This does not happen if you plug it into a USB charger, so put the charger inside the box, use a 3-core mains lead and connect the circuit ground to mains earth.

I mounted the whole thing in a Cuban cigar box. My antennae are made from 6mm diameter aluminium rod (ordered new I'm ashamed to say, most expensive part of the project) with banana plugs on the ends connecting to sockets on the case for added portability.

So here's what you've all been waiting for...my rendition of Star-Spangled Banner on my home-made Theremin! With massive apologies to everyone, especially Americans. I just said I designed and built it, never that I knew how to play it...

A commercial theremin has a variety of knobs and dials on the front, by which various operational parameters, such as the available range of pitch, can be adjusted. Of course, since my theremin is controlled by software it is easy to alter settings, but I did not want to clutter the box with controls (and couldn't be bothered with the wiring). However, since the instrument is played without touching the antennae, why not touch the antennae to access the setup functions? When an antenna is touched, it causes a relatively large change (about 10kHz) to its associated oscillator frequency. This is easily distinguished from the changes due to playing the instrument normally, which are in the order of 2-3kHz. Because a musician might accidentally touch one antenna while playing, the only way to stop playing and access the setup system is by touching both simultaneously. This diagram illustrates the the state transitions that comprise the setup system -- it's also a working model of the system in Simile!

OK, so what exactly does this mean? Simple. When you start the program, you go into the 'Play' state, and can play normally. You can get out of this only by touching both antennae at once -- "Touch both" on the diagram. This takes you to the "Standby" state in which no sound is produced. From here you can touch both again to get back to play, or touch either one to enter one of the setup sequences. The setup options are divided into two sequences according to whether they are to do with pitch or not. Touch the pitch antenna from standby to go to the pitch settings sequence, starting with "Pitch range", or touch the volume antenna to go to the other settings sequence, starting with "Tone". When in any setting mode, you can play each possible value for the setting, using the volume antenna to control the setting itself (the actual volume is fixed), while controlling the pitch in the normal way with the pitch antenna. To save the setting and move to the next, touch the pitch antenna while being careful to keep the volume distance right for the setting you want. Alternatively, touch the volume antenna to skip to the next setting in the sequence without changing the current one, or touch both antennae at once to go straight back to 'Play'.

So...what are those settings?

To help you navigate around the settings, I have also included a generated voice announcement to the audio output naming whichever state has just been entered. These cam be removed or changed by removing or changing the .wav files in the installation.

You can use Model A/Model B

These early Raspberry Pis had a smaller GPIO header than the more recent models, and only one of the hardware clocks was accessible. However the chips also include two hardware PWM channels, and one of these is available on GPIO18 of all models including the A and B. This can be used as one of the reference oscillators, and I have now fixed the software to allow it to do so. Just set the REF_P and REF_V constants to 4 and 18 (order depends on your wiring!) This should also work on the Pi 4B, if you are desperate to use one of those. However... If you are using a Model B Rev 0, then you have access to a hardware clock on pin 21. You can use this instead of pin 6, and keep your PWM modules free for generating onboard sound. This clock requires a password to be ORed with the pin number, and the pigpio documentation says using it will probably crash your micro-PC, but I have used it for this project without problems. You do not have pin 27 on this hardware version though, so use pin 23 for the volume beat input instead.

In this design, the output of each oscillator is sampled at a frequency generated by the micro-PC to provide a waveform at the 'beat frequency' which controls the generated sound. This sampling is done by a D-type latch, with a 74HC74 chip conveniently having one for each oscillator. But the Raspberry Pi also includes a subsystem that can sample an input signal at a rate set by the programmer up to 8MHz, with the same flexibility as the PWM channels described above. It's the SPI (serial peripheral interface) controller, and except on model A/B there are two instances of it! So -- can we make the ultra-simple even simpler?

The SPI is designed to exchange data with peripherals in discrete chunks. The Pi acts as master, sending clock cycles to the slave, which is supposed to accept and/or generate a single bit of data at a certain point in each clock cycle. If we are going to use the SPI to sample our oscillator waveform, the 'peripheral' is completely ignoring the clock, indeed we don't even connect the clock pin. All that matters is that the level is sampled at regular intervals at a frequency we can set up in the code. We know the clock frequency, having set it, so we can look at bursts of 1s and 0s in the incoming data to find the beat frequency.

The pigpio package we have been using to interface with the header pins has functions for accessing the SPI modules, but these work by 'polling' the FIFO registers, i.e., continually checking if a word can be read or written. This means that if the processor gets diverted to another task, some samples might be missed, resulting in the wrong frequency being detected. But there are kernel drivers available, and these use DMA and/or interrupts to service the FIFO, making data loss much less likely. The wiringPi package uses these drivers -- unfortunately, as published it can only access the main SPI controller, whereas we want to use the main and auxiliary controllers to sample the pitch and volume oscillators respectively. So I have added an edited version to this project's repository which can do that.

How to use it?

This is only tested with the Raspberry Pi Zero.